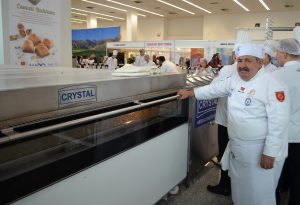 Crystal mobilized its headquarters and built the oven especially for the event, with measurements of 300 x 750 centimetres. Baklava is a traditional Turkish dessert, made with chopped nuts spread in between layers of dough and dressed with butter, baked and sweetened with syrup or honey. The record-holder baklava weighed exactly 518 kg and was cooked in 80 minutes in one single tray.

Crystal’s general manager, Ramazan Kaynakcı, mentioned how proud the company is to share the record. “Our teams worked tirelessly to achieve this goal. The entire process took about six months to be completed and now, after meeting the result, I can say that all the hardship experienced during the production phase was worth it! I would like to extend congratulations to the entire Crystal Industrial family, particularly to our engineers and R&D team.”

The feit was also featured on Reuters. Click here to read the full story.